3 fruits to avoid during the first trimester of your pregnancy

There are some fruits that are best to avoid in pregnancy for very good reasons. Find out more.

Pregnancy is a journey with many changes. From morning sickness to rapid changes in body structure, pregnant women adapt to a different set of routines that they aren’t normally used to. One of the main changes is diet: Exactly what’s safe and beneficial to eat, and what isn’t? Are all fruits safe to eat, and if not, why? Here, we discuss three fruits to avoid during pregnancy first trimester. But first…

Why is the first trimester of pregnancy so important?

A woman’s pregnancy is divided into three parts, or trimesters. The first trimester is regarded as the first three months of your pregnancy.

The first trimester is important because even though your bump is barely showing, your baby is physically growing inside you. By the end of the first trimester, most of your tiny fetus’s organs have formed already.

Your little one is growing rapidly during the first trimester. By the end of it, he or she already has a complete set of organs – from the brain, heart, to even the voice box and eyelashes! | Image source: stock photo

Since the fetus is still developing, it is also defenseless as it still doesn’t have its own immune system. All of its growing organs can be injured by a variety of things, such as drugs, infections, radiation, tobacco and toxic chemicals.

Knowing all this, one way of keeping you and your fetus healthy is to refrain from alcohol, caffeine, smoking or drugs. Healthy fetal development also goes hand in hand with good lifestyle habits, such as exercising regularly, drinking adequate amounts of water and eating the right things.

When it comes to food that is not safe to eat during pregnancy, we know of the usual suspects: soft cheese, sushi, soft-serve ice-cream – anything that can result in food poisoning. However, did you know that there are some fruits too that you should avoid, especially in the first trimester?

Grapes are among the fruits to avoid during pregnancy first trimester. | Image source: stock photo

There are mixed opinions about grapes when it comes to fruits to avoid during pregnancy first trimester.

Some experts advise that’s it safe to eat while some say it should be avoided. While grapes do have high levels of vitamin A and C (which are important nutrients for pregnant moms), there are a few reasons why you might want to steer clear from grapes in your first trimester:

If you are concerned about eating grapes while you are pregnant, please consult your doctor or gynecologist for further advice. 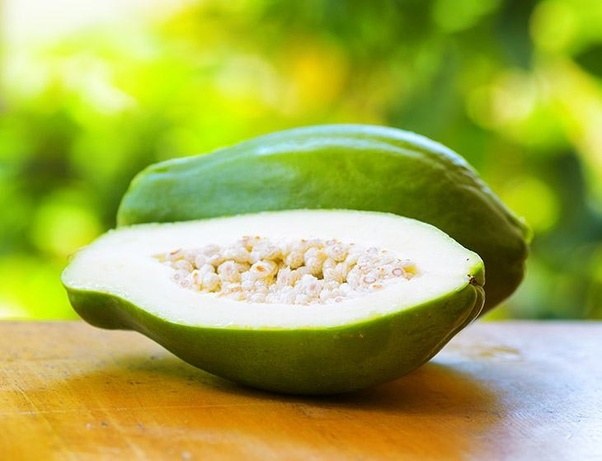 Fruits to avoid during pregnancy first trimester: stay away from unripe or semi-ripe papaya

Papayas are known for their sweet, juicy, orange flesh and as a natural remedy for indigestion. It is common in tropical countries and comes in a variety of types and sizes. However, the unripe and semi-ripe forms of this fruit aren’t particularly good for pregnant women for the following reasons:

Do avoid food or dishes that contain unripe or semi-ripe papaya (which have completely green skin), such as green papaya salads or papaya smoothies containing papaya seeds.

While the unripe versions are best not eaten during pregnancy, ripe papayas, on the other hand, are completely safe.

In fact, ripe papayas (with fully yellow skin) contain many nutrients that are important for a healthy pregnancy, such as:

Apparently, this tropical wonder can cause you to go into labour early, and is among the fruits to avoid during pregnancy first trimester. | Image source: stock photo

Who doesn’t like pineapple? It’s sweet, bright yellow and is tasty whether eaten ripe or used in dishes (like pineapple fried rice).

Sadly, this tropical fruit isn’t suitable for pregnant women. Pineapple is known to contain bromelain, an enzyme which breaks down protein. One of its side effects is that bromelain may soften the cervix, which could lead to early labor.

Studies also show that bromelain tablets are so potent in breaking down protein that they even can cause irregular bleeding!

However, do note that you need to eat massive amounts of pineapple (between seven to ten fresh ones at one go) to actually induce this effect. This means that while concentrated bromelain pills should be avoided, eating a few slices of pineapple while pregnant is okay.

Do note that eating too much pineapple can cause issues due to its acidic nature, such as acid reflux,  heartburn, and even diarrhea (which leads to dehydration).

Also, if you haven’t eaten pineapple for some time, it’s possible that doing so will cause an allergic reaction. If you have symptoms like nasal congestion, itchy or swollen areas in your mouth or asthma after consuming pineapples, do book an appointment with your local doctor and discuss this.

All fruits should be washed before and after cutting.

Clearly, unwashed fruits aren’t fit for consumption whether you are pregnant or not. However, they are especially risky for pregnant women.

The soil particles on fruits and vegetables can harbor bacteria such as toxoplasma, which makes infection possible for both the mother and baby.

Always wash your fruits and vegetables, ensuring that they are completely free of soil particles before eating them.

Why should pregnant women eat fruits as part of their diet?

Fruits are an essential part of a pregnant woman’s diet. Not only do they have nutrients that support your baby’s growth, but they also provide minerals, vitamins, antioxidants and fiber.

Furthermore, their rich nutrient content is counterbalanced by low calorie content, making it the ideal food for pregnant women! In addition, the following benefits have been linked to fruit consumption:

What fruits are completely safe to eat during pregnancy?

Apples contain a variety of beneficial nutrients, like fibre, vitamins A & C, and potassium. In addition, previous research also highlights another added bonus: Most children born from mums who ate apples while pregnant did not develop childhood asthma or allergies.

In addition to preventing childhood eczema, oranges also have:

Bananas contain high levels of potassium, vitamin B-6, vitamin C and fibre. Fibre in bananas can help prevent constipation, whereas vitamin B6 can mitigate nausea and vomiting from morning sickness.

Avocados are the nutrient powerhouses of all fruits, containing a diverse array of nutrients such as:

In particular, eating avocados can reduce the instances of:

NOT on the list of fruits to avoid during pregnancy first trimester!

These yummy fruits are also nutrient-dense superfoods which provide a lot of beneficial compounds, such as:

To maintain healthy levels of energy during the day, pregnant women should consume 50 to 60% of their calories from carbohydrates. Berries pack a lot more nutrients than other “empty calories” from refined grains. Do consider limiting refined carbohydrates and eating more nutrient-rich sources of carbohydrates like berries, instead.

We hope this information on fruits to avoid during pregnancy first trimester has been useful to you, and helps you ensure a safe and smooth pregnancy!