Traveling to Seoul with kids: getting there, where to stay, what to do

We're dishing out important tips on traveling to Seoul with kids and babies—getting there, where to stay, what to do.

In this Korea travel blog post, we will be giving tips on how to travel abroad with kids, where to stay, places to visit, and getting the most out of your family trip.

During the Halloween break, our family went to Seoul for a much-needed family vacation. It was our second time in the land of K-pop, K-drama, and K-beauty, but we felt like we were exploring the city for the first time. Seoul in autumn is super different from when we first visited last Christmas, during winter. The fall colors made everything look like its on a perennial Instagram filter!

Seoul should definitely be in your family travel bucket list—but as every parent knows, traveling with kids is just so darn hard. That’s why we decided to make a Korea travel blog post on the topic.

We had to schedule our flight dates during our son’s sembreak. Luckily, we were able to still get reasonably-priced tickets to Seoul (Incheon) via Philippine Airlines (PAL). Our travel party includes my husband and I, our two kids—our 6-year old son and our 1-year old daughter—and our extended family. We were a group of 13 all in all!

Going to the city

Once you’ve arrived in Korea, you have a few options to get to the city—taxi, bus, or train. But since our flight arrived at night, I wanted to get to the hotel as quickly as possible because the kids (and the adults) were hungry and tired.

I booked a private airport transfer via Klook for around P6,600. Since we were a big group, the price for our chartered car was sulit because the Korea Airlines limousine bus costs P750 each.

The 90-minute ride to the city was a breeze. The seats were comfortable and the driver was courteous. We were dropped off right outside our hotel! 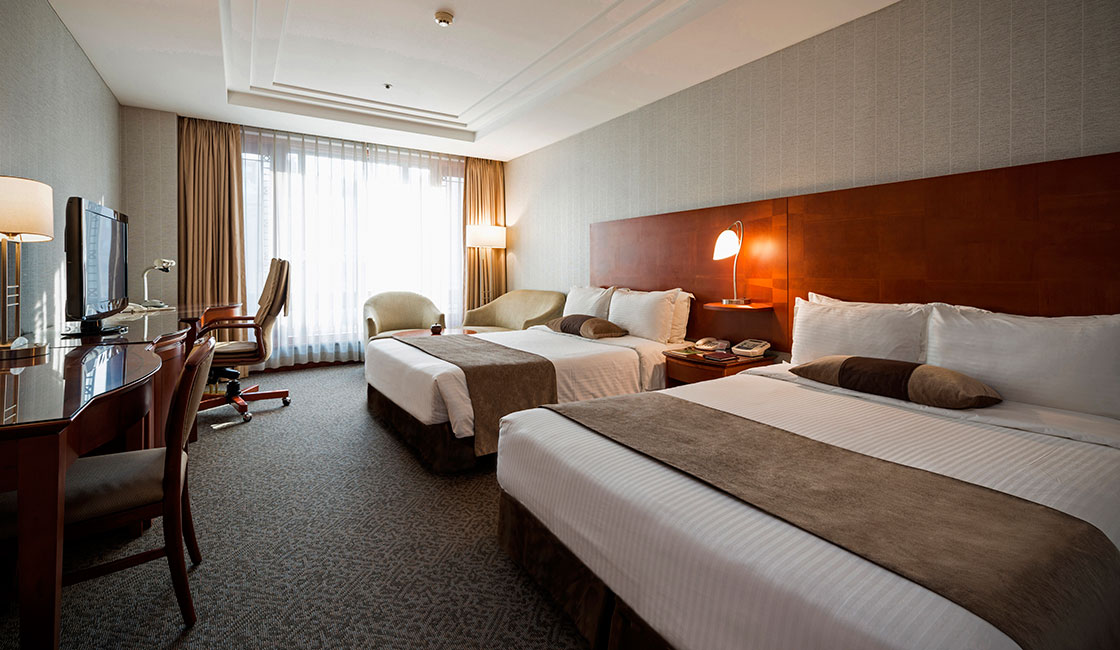 Last Christmas, we stayed at the Koreana Hotel, near the City Hall. We didn’t have that many options since we booked our trip a week before our departure date. The hotel I wanted, Metro Hotel, was already booked, so we ended up getting a deluxe family twin room with two full beds here through Booking.com. (Use this link to get a 10% refund on your hotel booking.)

It was a good second option because the Korea Airlines limousine bus stops right at the hotel. Gyeongbokgung Palace and Deoksugung Palace (where scenes from Goblin were shot) were within walking distance, so was the City Hall subway station. Plus, the room was huge! We had enough room for our luggage, stroller, and kids running around.

The downside was the furnishings looked outdated, but the beds were comfortable and the room was clean. The area around the hotel was also quiet, not that many things happening. There are a few restaurants around, but not that many choices.

This time around, I made sure I got the hotel I really wanted—Metro Hotel, which came highly recommended by my friend. And it did not disappoint.

We got the comfort twin room with two queen beds. The room was well-planned out with a closet, a bench, a trolley (which we used as a hamper), a table, and lots of sockets! There was also a separate sink outside the bathroom, which was super helpful because I was able to wash baby bottles here.

The hotel also had a UV sterilizer, high chairs, coin-operated laundry, and the best part, an indoor playground. The playground was heaven-sent because I was able to pack in peace when we were about to check out. The hotel also serves free breakfast.

There’s a Starbucks and 7-11 at the hotel’s ground floor. There’s also an Innisfree across the road. The airport bus stop was just around the corner and so was the subway station. The area, Myeongdong, was also a good place to stay at because all the shops, restaurants, and night market were within walking distance.

I’ve learned my lesson when it came to Korean weather. “Real feel” will always be way colder than the temperature. Also, temperatures unpredictably drop.

Last winter, I researched that the temperature will be around 5-10°C. I packed winter clothes for the kids. When we got there, temperature dropped to -1°. This is the reason why the kids didn’t really enjoy Everland theme park—it was just too cold to walk around outdoors.

This time, even though it’s just autumn, I knew it would be way much colder than 10-15°C, so I packed our winter clothes. True enough, it was more like 5°C.

For winter clothes for the kids, I bought Heat Tech thermal wear, flannel shirts, and fleece-lined pants from Uniqlo. I was also able to score ski pants on sale from Giordano when we went to Hong Kong last July. I also see a lot of winter clothes in H&M.

For this trip, my son was wearing two layers of clothes plus a jacket.

I also bought pile-lined bodysuits for the baby from H&M and Old Navy. My baby had a down jacket, but she didn’t like it because it was too thick and she couldn’t move that much.

Tip: Make sure to always cover kids’ necks, to prevent them from catching a cold.

Since we were traveling with a baby, we knew that we couldn’t pack our day with different activities. We limited our schedule to one activity per day. We also skipped the historical tours, especially the walking tours, because we wanted to have a flexible schedule. We needed to be able to take breaks in case the kids are tired or we need to change nappies.

Because of the cold weather, we decided not to go back to Everland. Instead, we went to Lotte World, a smaller theme park, because it was indoors. We got discounted tickets from Klook—P1,493 each instead of P2,578. Children below 3 years old get in for free.

I suggest going on a weekday because it’s not as crowded. There aren’t as many rides for small children, but there’s a play place that they can go to. There’s also a nice Baby Center where you can breastfeed, change diapers, heat food, sterilize, and wash bottles. We stayed here most of the time, while my son and husband explored, because the baby wanted to nurse and nap.

Nami Island is actually outside Seoul. Last winter, we took a train going there because the bus tour was already full. I wouldn’t recommend taking the train because you still have to take a shuttle going to Nami’s ferry port, plus another shuttle to Petite France or Garden of Morning Calm. Plus, since there is no reserved seating, you have to literally fight off other passengers (read: magulo at walang pila).

You can book a tour bus from Seoul for around P1,200+ roundtrip via Klook. This includes the bus ride and the entrance fees.

It was beautiful because everything was covered in snow. There weren’t as many tourists, too, so it felt like we had the island to ourselves. We opted to get the electric bus tour, which was a good idea because the driver knew the nice places where we can take pictures.

Thank God 2017 is over. What a ride. I hope this coming new year is not as drama-filled. Kalma na, please. ❤️❤️❤️ wishing you all a happy new year!

I’m not a big K-drama fan, but our guide told us that Winter Sonata was shot here.

We knew that the fall colors would be nice too, so we decided to go back to Nami Island for this trip. Since we were a big group, I decided to charter a van (good for 8-14 people) from Klook for around P18,000 for 10 hours. It’s pricier than taking the tour bus, but we wanted to have a flexible schedule. We also didn’t want to leave super early since we had to get the kids fed, bathed, and clothed! We were picked up at the hotel at 9 a.m.

Nami Island is actually a man-made island. You have to take a short ferry ride, or if you’re adventurous, you can zipline, too! There are a lot of activities within the island. You can take the electric bus or the train to get around. My husband and son rented a tandem bike, while my daughter and I played at the playground.

Allot around two hours for Nami Island. Since you’re already in Gapyeong-gun, you can also go to Petite France and Garden of Morning Calm.

Petite France is a small (petite) hill-top French-themed village. It’s very picturesque and Instagram-worthy because of it’s colorful houses, Little Prince references, and trinkets for sale. Scenes from My Love From the Star were shot here. But really, it’s more for adults than kids—although there’s a free puppet show, which my son liked.

If you’re going in Autumn, Garden of Morning Calm is the better option, in my opinion. It’s small enough for a quick 1-hour side-trip. Plus the colors are amazing. Check out the pink grass!

We also got discounted Klook tickets for the observation deck. From the deck, you’ll be able to see great views of Seoul. There’s a love lock tree where you can put your padlocks. My kids didn’t enjoy N-Seoul Tower that much because there weren’t any activities for kids. (There’s a Hello Kitty Museum though that you can check out.)

Seoul has five of royal palaces—Gyeongbokgung being on of them. It’s the most popular one because it’s the biggest and some say, the most beautiful of all. It’s in the City Hall area, but you can take the city tour bus, which will drop you off at the back entrance. Some tourists rent hanbok (Korean traditional clothes) and take pictures in the palace and the surrounding old houses.

Peek-a-boo, I see you! #seoulsojourn