And finally, the long wait is over! Prince Harry and Meghan Markle’s baby is here, and it’s a… BOY!

In his first interview after the birth of his son, Prince Harry has been quoted as saying, “It’s been the most amazing experience I can ever possibly imagine.”

“How any woman does what they do is beyond comprehension, but we’re both absolutely thrilled.”

He gushed, “I’m so incredibly proud of my wife. And as every father and parent would ever say, your baby is absolutely amazing. But this little thing is absolutely to die for, so I’m just over the moon.”

He added that they are still thinking about names and that they, as a family, will face the people/media in “probably two days’ time as planned” to formally introduce the royal baby. The Prince also thanked well-wishers for their support.

The exciting news was first announced on the SussexRoyal Instagram page on May 6, 2019. The baby was safely delivered at 5:26 am, and weighed 7lbs 3oz (approximately 3.26 kg) at birth.

“The Duchess and baby are both healthy and well, and the couple thank members of the public for their shared excitement and support during this very special time in their lives.

“More details will be shared in the forthcoming days,” said the statement.

View this post on Instagram
We are pleased to announce that Their Royal Highnesses The Duke and Duchess of Sussex welcomed their firstborn child in the early morning on May 6th, 2019. Their Royal Highnesses’ son weighs 7lbs. 3oz. The Duchess and baby are both healthy and well, and the couple thank members of the public for their shared excitement and support during this very special time in their lives. More details will be shared in the forthcoming days.
A post shared by The Duke and Duchess of Sussex (@sussexroyal) on May 6, 2019 at 6:37am PDT

This little baby is seventh-in-line to the throne, behind the Prince of Wales, the Duke of Cambridge and his children – Prince George, Princess Charlotte and Prince Louis – and Prince Harry.

Earlier, official updates on Twitter had revealed that Meghan Markle, the Duchess of Sussex, had gone into labor in the early hours of this morning.

“The Duke of Sussex was by Her Royal Highnesses’ side,” it said.

The Buckingham Palace has shared that, “The Queen, The Duke of Edinburgh, The Prince of Wales, The Duchess of Cornwall, The Duke and Duchess of Cambridge, Lady Jane Fellowes, Lady Sarah McCorquodale and Earl Spencer have been informed and are delighted with the news.

“The Duchess’s mother, Doria Ragland, who is overjoyed by the arrival of her first grandchild, is with Their Royal Highnesses at Frogmore Cottage.” 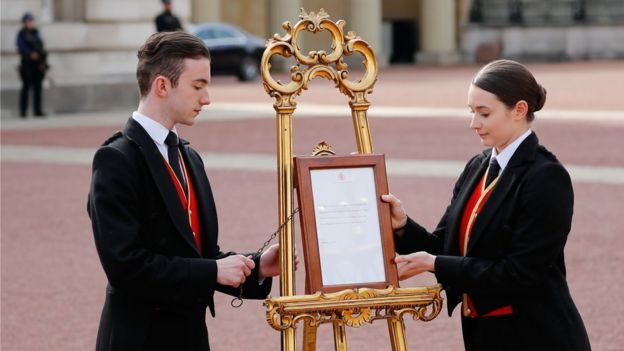 The announcement of the royal baby’s birth outside Buckingham. Photo: BBC/AFP

We can’t wait to catch a glimpse of the little prince!