Old peso bills will no longer be valid in 2016 According to Bangko Sentral ng Pilipinas, come 2016 most of our old peso bills will no longer be valid. Learn more about it here.

According to Bangko Sentral ng Pilipinas, all bills printed in 1985 will be completely demonetized come 2016.

This is in compliance with Section 57 of Republic Act No. 7653 or the New Central Bank Act, the BSP is authorized to replace banknotes that are more than five years old.

Most of our old peso bills have been in circulation for three decades.

Starting January 1, 2016 until December 31, 2016, these old peso bills or banknotes need to be exchanged to allow the New Generation Currency (NGC) to be the sole series of currency circulating in the country.

The BSP says that NGCs are more user-friendly and that their denominations are easily identifiable because of their color and distinct characteristics.

They also cited security features such as the embossed texture on the front and side of each bill to aid visually-impaired people to easily distinguish each denomination.

To protect against counterfeiters, the BSP also made sure to print big numerals corresponding to each denomination on each side of the banknotes.

They also released a helpful inforgraphic to make sure the public is guided accordingly. 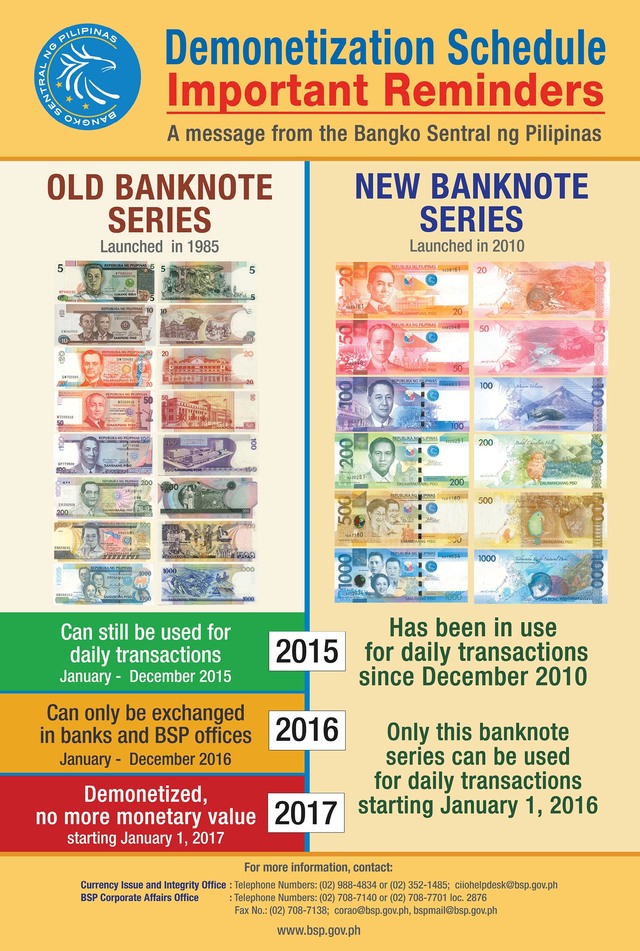 BSP shared important reminders to the public regarding this process.

3. As for government institutions with old banknotes which could not be exchanged in time, they will have to request the BSP Cash Department in writing for a special exchange arrangement.

4. As for Filipinos overseas who still have old banknotes but could not exchange them within 2016, they may register online starting October 1, 2016 to December 31, 2016 through the BSP website. They can exchange their old banknotes with the BSP within one year from date of registration.

5. Beginning January 1, 2017, old banknotes that have not been exchanged in time will have any monetary value; they will be officially considered demonetized.

Though there will be no changes in the bill’s design or color, BSP Deputy Governor Diwa Guinigundo shares that they are trying to subtly change the color of the bills “to make sure that blue is really blue and violet is more violet.”

Learn more about this through a report by ABS-CBN.