Rich Asuncion will be a mom of two soon!

What you can read from this article:

Rich Asuncion has some good news from Australia: “Baby #2 on the way! Here we go again…” She wrote as a caption on her instagram post, tagging her husband, player Ben Mudie.

The first showed the StarStruck alumni and her eldest daughter Bela showing their tummies: Bela’s had “#1” written on it while Rich had “#2.”

Fellow StarStruck alumna Jade Lopez, who is also pregnant with her second baby, got this reply from Rich, “It’s a tie!!!” 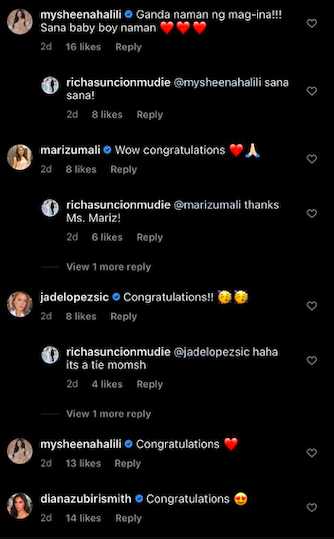 Rich and Benj wedding happened last May 2018.  We can recall how Rich Asuncion announced last 2018 that she and husband Benjamin Mudie had their first child together.

7 ways to prepare your body before you plan your pregnancy

As reported, the “Starstruck” alumni announced the good news on the birthday of her husband via a clip on Instagram, which she captioned,

“I’m happy to announce our family is about to grow by 1 and we wish to invite you all to share the experience with us as I journey through life as a wife and a mother-to-be.”

She also posted another photo of the two of them celebrating Mudie’s birthday, writing,

“Happy Birthday soon-to-be Daddy!!! -From me and your little one.”

In a YouTube video she also shared online, Mudie can be seen talking to the camera and sharing that they were going to do a pregnancy test using a kit bought earlier.

They later tried again after realizing that Asuncion made a mistake in the previous test, to which Mudie joked,

“Let’s just pray the baby doesn’t take after in terms of this silliness genes!”

Mudie later shared the pregnancy stick to the camera and revealed that they are having a baby. Mudie and Asuncion tied the knot in a small wedding held in Hong Kong back in May this year after three years of relationship.

They had their very first daughter named Isabelle Brie last  December 2018. Indeed time really flies so fast because now, they will be having their second baby!

Rich Asuncion entered showbiz through the GMA talent reality show StarStruck: The Next Level where she was named First Princess. She also starred in the series Let The Love Begin, Ika-6 na Utos, and Dahil sa Pag-Ibig. In 2009, she placed first runner-up in Binibining Pilipinas.

She was also based in Canberra since March 2020, the start of the global pandemic. In June 2020, she talked about getting her first pay from her casual job as a waitress in a restaurant.

“My point here is, I know most of us will need to adjust to a new/different life after this pandemic. And that’s not all that bad.

“To be able to survive through this is already a blessing. As hard as it may seem, look for the silver lining.”

In her case, being able to do her duties as a hands-on mom and continuing her studies top her list of priorities.

Things you need to know about having a second child